If you’re new to this site, let me first point out that I attempt to cover all products the size and shape of a credit card.

The latest in credit card-sized technology comes courtesy of the “Arduboy,” which is clearly a play on Nintendo’s Gameboy, coupled with the open-source electronics prototyping platform Arduino.

This is probably the coolest credit card-sized device I’ve ever seen. But in terms of practicality, it might just be really, really silly.

And while the company behind it shows off its ability to play “Flappy Ball” (what?) and Tetris, its potential is possibly much greater. 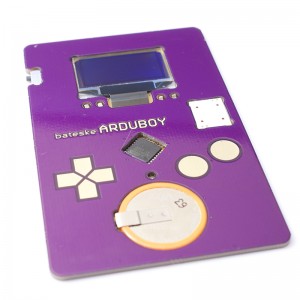 The company behind Arduboy, known as Bateske, refers to the prototypical device as an “Interactive Digital Business Card.”

In other words, why settle for a standard paper card when you can hand out digital business cards that do all types of cool stuff?

It would certainly be a PR winner, if nothing else. That’s kind of where I see the value.

So what the heck is it? Well, in a nutshell it’s a circuit board the size and shape of a credit card with an OLED screen, a small speaker, up/down/left/right control buttons, and A and B pads.

Put simply, it’s an even smaller Gameboy, one so small you can put it in your wallet alongside your credit cards.

But I Already Have a Smartphone

Unfortunately, this technology seems a little old-fashioned seeing that most individuals have smartphones that feature large, colorful screens and the ability to play countless video games.

So using this device simply to play video games seems a bit pointless, as the small black and white screen and tiny control buttons probably won’t make for an awesome gaming experience.

However, the “cool factor” is certainly something one could show off to friends and co-workers, especially gamers.

And as I mentioned earlier, if used as a promotional device, or developed further, it could actually prove to be quite useful.

But as of now, it’s just “neat.” For the record, the developer is aiming to get a Kickstarter campaign going in the near future, with the hope of sending out kits where buyers can put together the device themselves.

That being said, you’ll need to know what you’re doing if you want to carry the Arduboy in your wallet.

This kind of reminds me of Coin, the credit card-shaped device that allows you to swipe countless cards using one device. Again, it seems like bad timing with phones replacing plastic, but time will tell who’s right.