It was revealed earlier this year that Costco was ditching American Express in favor of Citi after the pair was unable to renew their longstanding contract. So come next spring, you’ll be swiping with a Citi-based Visa credit card at Costco, not your current Amex.

The name of the new Costco credit card is “Costco Anywhere Visa Card by Citi.” The emphasis seems to be on “anywhere,” as in use it at places other than Costco, pretty please.

There will a consumer credit card and small business credit card, but it’s unclear what the differences will be.

The cards will also feature a typical cash back rewards program, coined “Costco Cash Rewards,” with gas purchases being the biggest rewards category. These are actually really solid cash back categories overall.

A few details about cash back inclusions and exclusions. You’ll only earn 1% on gas if it’s purchased from superstores (non-Costcos), supermarkets, convenience stores, or for non-auto gas (rocket fuel?).

Restaurants does not include bakeries, or certain restaurants/cafes located within department stores or grocery stores.

Overall, the new Costco Anywhere Card boosts each category by 1%, so the old 3-2-1 rewards structure will soon be 4-3-2-1. Can’t argue with that!

How Much You Can Earn 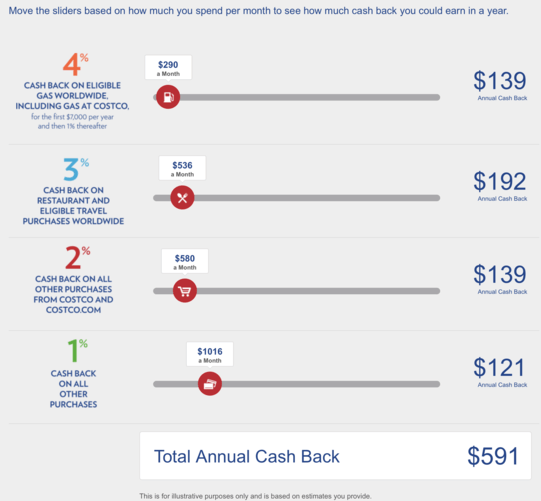 As you can see, the cash back can add up pretty quickly depending on how much you spend on the card each month. I inputted some conservative figures in to come up with about $600 in annual cash back earnings.

Obviously the more you swipe the more you’ll earn in the way of cash back. Just note that the gas station category does max out at $7,000 each year.

The cash back can be redeemed in the form of a check at Costco warehouses or redeemed for merchandise. The so-called “Rewards Coupon” is allocated annually and will be included with your February billing statement for the previous year’s purchases. It expires on December 31st of the year issued.

There will also be some kind of promotional APR for purchases and balance transfers, and like its predecessor, no annual fee with paid Costco membership.

All in all, it’s pretty decent, and a step up from the existing TrueEarnings credit card from Amex.

Costco already provides products at a low price (apparently, I don’t shop there) so they have little incentive to give cardholders much more in the way of discounts, but they’re still being generous in doling out 2% cash back at Costco.

And getting gas at Costco gas stations for 4% off will also be huge I imagine.

I already get my gas for 5% off thanks to my original Blue Cash card from Amex, but Costco gas stations are often the cheapest around.

If you’re an existing cardholder, expect to receive your new Citi Costco credit card in either May or early June.

You can start using the new card at Costco beginning June 20th, 2016. The old Amex version of the card will be void after June 19th, 2016 (not just at Costco but everywhere).

If you have any cash back earned from the old card it will automatically transfer to the new card from Citibank.

Also, don’t worry about your credit score taking a hit as a result of the new card. Citi will not pull your credit as part of the account transfer process, so there won’t be an inquiry.

Additionally, you will maintain your existing credit line so if it was $10,000 on the Amex version of the card, it will be $10,000 on the Citi version as well.

Finally, it should be noted that in “certain very limited situations,” some cardholders won’t be transferred from Amex to Citi. I don’t know why, but I’m assuming these customers are being dropped and thus not transferred. If this happens to you expect some form of correspondence from American Express.

Is the Costco Anywhere Card also my Costco membership card?

Yes, and there is no annual fee with your paid Costco membership.

I’m currently a cardholder, do I need to apply for the new Citi-version of the card?

No, Citi will mail you a new card with instructions on how to activate it. You may want to register the card at Citi.com so you can manage it online.

Is there a limit to the amount of cash back I can earn?

Will Citi pull my credit in order to approve me for the Costco Anywhere Card?

No, they won’t run your credit as part of the account transfer process.

When can I start using the new Costco Anywhere Card?

Will my payment due date be the same?

It should be the same or very similar. But you also have the option to change it by contacting Citi or adjusting it online.

What if I have a balance from my American Express Costco card?

What happens to my rewards from the old card?

Rewards not previously distributed will be transferred automatically to your new card with Citi so your February 2017 cash back rewards coupon may include earnings from early 2016 made using your Amex card. Note that any earned Membership Rewards points won’t be transferred, so contact Amex regarding that.