Some more credit card Q&A, this time concerning the number of credit cards you can apply for in a certain period of time (and hold) successfully.

This question certainly depends on the card issuer, but some new rules are preventing approvals even if you’ve never applied with a given bank. 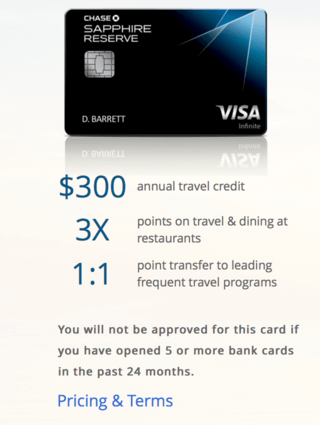 Earlier this year, Chase instituted a new policy (it’s not written anywhere publicly) referred to as the “5/24 rule.”

Apparently the rule only applies when you apply for a personal Chase credit card that earns Ultimate Rewards, such as Chase Freedom, Chase Freedom Unlimited, and Chase Sapphire Preferred. So it’s really only three cards that are restricted.

However, business cards such as Chase Ink should be exempt from this rule because they’re tied to a business credit report as opposed to a personal credit report.

Additionally, co-branded Chase credit cards may also be exempt so you can still apply for the Chase Hyatt card, the Southwest Airlines Rapid Rewards Premier card, the United MileagePlus Explorer Card, and so on.

This is bad news for those looking to churn a lot of Ultimate Rewards credit cards in a small period of time because very few individuals that churn open fewer than five credit cards every 24 months, let alone in a year.

Tip: You can use Credit Karma for free to see how many accounts you’ve opened in the past two years by clicking the credit reports tab, then accounts, then sort by open date.

Also, if you’re denied, you can try to get around the 5/24 rule by calling Chase directly (reconsideration line) and asking if you can close an existing Chase credit card in order to open the new one. Or try opening a card with a personal banker in-branch.

We’ve had success with getting around the Chase 5/24 rule simply by checking for pre-approved offers on the left sidebar of the new Chase website.

If you just hit 5/24, like in the past few days or maybe week, you might be able to apply for another Chase card before that fifth card hits your credit report. It could be a good time to squeeze one last card through…

Lastly, there’s been some confusion about what the 5/24 rule pertains to – as noted, it applies to cards you’ve been approved for. The number of credit inquiries on your credit report in the past two years doesn’t matter, nor do credit cards you were declined for.

Chase also has a “2/30 rule,” which means you can only apply for new Chase credit cards twice a month. If you apply for a third in 30 days, you’ll likely be automatically denied.

One way around this is to apply for two Chase cards on the same day, thereby combining the hard pull and tricking the system.

With Citi, you can only apply for a new Citi credit card every eight days, and only do so twice in a 65-day period.

I actually did that recently to take advantage of both 50k sign-up bonuses and it worked just fine.

After you’ve been approved for two Citi cards, you have to wait a full 65 days before applying for another (third) Citi credit card.

Again, this is an unwritten rule but one that seems to be true. If you try applying for a third Citi credit card after receiving two approvals in less than 65 days you’ll likely be denied on that basis.

I haven’t tried it so I can’t back it with personal experience, but again it seems to be the rule with Citi.

The good news is that it only applies to Citi cards, unlike Chase’s more comprehensive 5/24 rule.

Another important rule with some of the premium rewards Citi cards is that you can’t earn the sign-up bonus if you’ve opened or closed a certain card in the past 24 months.

This rule applies to ThankYou Preferred, ThankYou Premier, Citi Prestige, and to the AA Citi cards.

For example, if you had a ThankYou Premier card that you closed 18 months ago, and wanted to apply for a Citi Prestige card, the bonus ThankYou Points wouldn’t be available to you.

In other words, it probably wouldn’t make sense to apply for the card. Instead, you’d have to wait for 24 months to elapse before earning a subsequent sign-up bonus.

Citi also has a “6/6 rule” that denies you if you’ve had six or more inquiries in the past six months.

In other words, if you’ve been churning heavily and getting credit pulls left and right, Citi might flag your application and deny you for their card.

While this is still widely debated, most pundits agree that the most American Express credit cards you can have at one time is four.

However, you can apply for multiple new American Express cards on the same day. I know this because it’s a tactic to avoid multiple credit inquiries.

Note that the “rule of 4” applies to credit cards and not charge cards. Many Amex cards are actually charge cards (Platinum, Green, Gold, Premier Rewards Gold) and these aren’t counted in the limit.

Additionally, Amex cards issued by other banks such as Fidelity Rewards shouldn’t count nor should prepaid cards like Bluebird and Serve, or authorized user accounts.

This makes the limit confusing to calculate and also weakens the limit itself. If most Amex cards aren’t even credit cards who cares, right?

Aside from Old Blue Cash, Starwoods Preferred Guest, and maybe the new EveryDay credit cards, what else would you want from American Express that isn’t a charge card?

Maybe the TrueEarnings card from Costco, but that’s going away soon and being replaced by Citi. I guess the Delta cards but you could always close an account and avoid that pesky annual fee in the process.

So if you try to apply for a third Amex in 90 days, it may be automatically declined.

Discover is a real stickler for credit card approvals, but because they only offer a few cards it’s not really an issue.

With them, you can only apply for a second Discover card after a full year has passed since you got approved for your first Discover card.

This has probably been an issue for those attempting to take advantage of the Apple Pay promo and the double cash back for new cardholders.

Apparently you can only have two Discover credit cards total in which you are the primary cardholder.

Again, not really an issue because they only have two credit cards worth applying for, Discover it and Discover it Miles.

However, note that you’ll probably need to explain why you want a second Discover credit card if you apply twice because the cards are so similar.

And you may need to reallocate your credit limit if you’re maxed out.

As with all things in the credit card realm, Your Mileage May Vary. If you’re concerned you may be declined and hit with an unnecessary credit hit, you can contact the card issuer in question before you apply and ask if there’s a limit based on your unique situation.

Just be careful not to put your foot in your mouth in the process. Maybe ask such questions discreetly and without identifying yourself.  And don’t be afraid to close a credit card if you want a different one.

Read more: How many credit cards should I have?

Chase Freedom cash back calendar:
5% cash back (on up to $1,500 in combined purchases) at Walmart and purchases using PayPal.

Citi Dividend cash back calendar:
5% cash back (up to $300 cash back per calendar year) at restaurants and on select travel.

Discover it cash back calendar: 5% cash back (on up to $1,500 in purchases) at Amazon.com and with Digital Wallets.