Just about every adult in the United States, and any other established country in the world, has a credit card or two (or three).

While this isn’t necessarily a bad thing, at least when it comes to personal finances and credit score, it can be an issue for the environment, seeing that all that plastic has to wind up somewhere.

After all, credit cards have a limited shelf, er, wallet life, typically only a few years before falling apart of expiring.

And while the numbers are a tad murky, one company estimates that more than 75 million pounds of credit card waste are produced each year.

[How many credit cards should you have?]

What Are Credit Cards Made Of?

Before we talk about recycling, let’s talk about what credit cards are actually made of.

Most credit cards (and debit cards) are made of polyvinyl chloride, known affectionately at PVC. You know, the same stuff plastic pipes are made of, along with shoes, packaging, and even bouncy houses.

[See some credit cards made out of metal and other materials.]

This material is strong enough to withstand most of the elements, but flexible enough to slide into your wallet and through a credit card processing machine.

Unfortunately, PVC isn’t widely recyclable, unlike plastic bottles made out of polyethylene terephthalate (PET), which have that little recycling icon on the bottom.

Notice that your credit cards don’t have any recycling icon or information whatsoever.

Still, PVC makers claim it can be recycled and reused, though there doesn’t seem to be a very accessible way of getting the job done.

Some cities have begun to recycle old credit cards and debit cards in the ubiquitous blue bins, though they typically must be kept intact (not cut up), which no one recommends obviously.

However, most cities still don’t want you tossing your old credit cards in the blue bins, as they don’t typically recycle PVC, so it ends up costing the city to remove the waste from the recyclable stuff.

There is one private company by the name of Earthworks that recycles used driver’s licenses, student ID cards, credit cards, gift cards, and so on.

But they don’t seem to have a great process for doing so – at the moment, their website merely says to contact them about sending in your old cards.

Ostensibly, you need to mail your old PVC-based credit cards to them, which they will then shred and turn into new sheets of polymeric scrap material that can be used to manufacture new credit cards.

Tip: Best Buy has kiosks in the front of their stores where you can recycle a variety of items, including plastic gift cards (Starbucks gift cards, Amex gift cards, etc.). I’m assuming old credit cards can also be recycled there, though I can’t verify this at the moment. 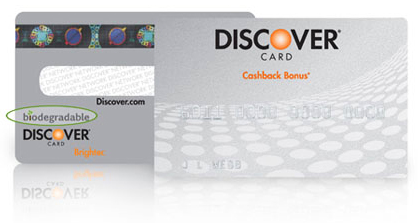 Back in late 2008, Discover introduced the first biodegradable consumer credit card in the United States.

It was a biodegradable version of their standard credit cards that broke down when placed in a landfill.

The biodegradable Discover Card was made of a type of PVC that allowed 99% of the card plastic to be “safely absorbed” in a landfill.

Put simply, when the card came in contact with microorganisms present in soil, water, or compost, it would break down and fully degrade within about five years.

Sadly, Discover discontinued the card, so consumers aren’t able to apply for one anymore. It’s unclear why they did away with it – perhaps it started biodegrading within individual’s wallets?

Regardless, a better solution could be to do away with cards altogether. Instead of issuing billions of payment cards, credit card issuers should look to mobile devices as an alternative.

I touched on the idea that credit cards could soon be obsolete, and this is one great reason why they should be.

If you’re not sure if your credit cards and other plastics are recyclable, contact your local city sanitation department to determine your options.

Assuming they aren’t recyclable, consider using your old credit cards for some other purpose, such as guitar pick, art project, container, etc…

[What to do with unused credit cards?]

Tip: Be sure to enroll in paperless billing statements as well, which will significantly reduce paper waste and the possibility of theft/fraud via your mailbox.

Chase Freedom cash back calendar:
5% cash back (on up to $1,500 in combined purchases) at grocery stores and on select streaming services.