It was issued by First USA, which was formerly one of the largest credit card issuers in the United States.

The company was eventually acquired by Banc One in mid-1997, and Chase took them over several years later in July 2004.

Let’s learn more about this silly old credit card, shall we.

What Did the Trump Rewards Visa Card Offer? 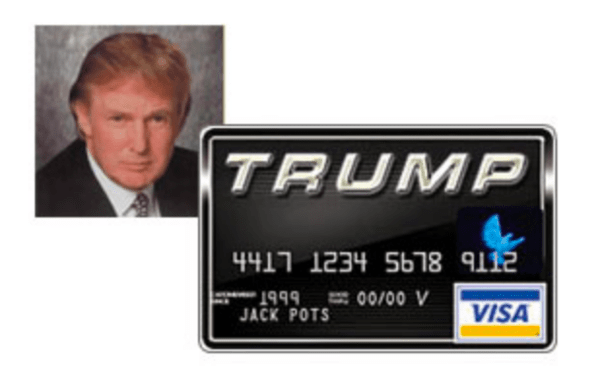 I was able to find some details on the old Trump credit card, which appeared to be aimed at gamblers who frequented his casino properties, like the Trump Taj Mahal and Trump Marina.

It apparently only offered a measly $15 in Trump Casino chips the first time you used the card, which pales in comparison to the several-hundred-dollar opening bonuses you can get these days.

Additionally, you had to spend $2,500 just to earn another $15 in chips, which is an earnings rate well below 1%. Again, awful when you consider today’s cards offer 2-3% cash back on all purchases.

The only way you could earn 1% back is if you redeemed the Trump points for food and hotel purchases at one of his casinos.

It’s unclear if or what the annual fee was, but I could imagine some annual fee on this pretty terrible credit card just to add insult to injury.

All in all, this may have been one of the worst credit cards in history.

A List of Trump’s Businesses That No Longer Exist

Wondering what other businesses Trump got into over the years? Well, there are probably too many to list here, but I’ve listed several above that no longer exist.

Yes, he had an airline, a board game, bottled water, a mortgage company, a steak company, a university, and even a vodka.

Surprisingly, he still operates the ice rink in Central Park, known as Wollman Rink, which seems to be the only real success in the bunch.

By the way, Trump Vodka was discontinued nearly a decade ago, but some bottles remain, and they ain’t cheap. I saw some going for nearly $5,000 online for a mere 750 ml bottle. Wow!