By now everyone is familiar with Apple Pay, which is expected to completely change the way we pay for things.

Instead of using a plastic credit card, we’ll be able to touch our iPhones to a payment terminal and select any card in our virtual wallet to complete the transaction.

Apple Pay users will also be able to store credit cards in the application and pay for things online via a much faster checkout process.

While this sounds great in theory, plastic credit cards aren’t extinct just yet, and companies are still working on making them smarter.

Last week, MasterCard and Zwipe introduced the world’s first biometric contactless payment card, which relies upon an integrated fingerprint sensor to get the job done.

How the Biometric Credit Card Works 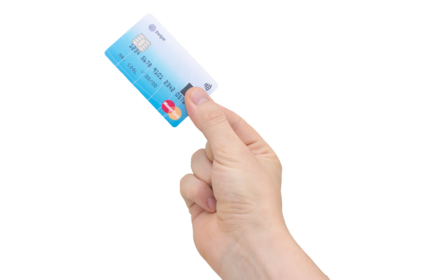 It looks just like a normal plastic credit card, except for the fact that it has a little fingerprint pad on the front side of the card (as pictured). By the way, it looks pretty rudimentary at the moment.

When the consumer wishes to make a contactless payment, otherwise known as waving your credit card in front of a payment terminal, they must hold their thumb on the pad while doing so to authenticate the purchase.

MasterCard has actually offered this type of contactless payment system for years if you recall “paypass.” And this won’t replace paypass, but rather update it by providing much better security.

If you think about, anyone can take another person’s credit card and wave it in front of a payment terminal without ever proving its their card.

Sure, the clerk could ask for ID, but often time’s they don’t, meaning someone could use your credit card without permission.

With the fingerprint technology in place, only you would be able to make the payment using the biometric credit card.

Why Bother with Plastic Credit Cards?

You might be thinking, “Why is MasterCard even bothering with a plastic credit card?”

Well, not everyone has or wants (or can afford) an iPhone 6 or a similar smartphone. So for the rest of the world, a biometric credit card actually makes a lot of sense to improve security for everyone (including payment providers).

It’s probably not that expensive to implement and it can accomplish the same basic thing as Apple Pay without the need for a smartphone.

Also, as everyone is aware, phones lose battery quickly. Credit cards don’t. So it might be more reliable to have a standard plastic credit card with the same basic technology.

The downside is that the biometric credit card will probably only replace a single credit card, as opposed to being a virtual wallet for all of your credit cards.

If companies like Coin could integrate a biometric feature, it could essentially create a plastic, more transportable version of Apple Pay that would fit in your wallet.  But that might be a rather large undertaking.

For the record, I already use Softcard, which is similar to Apple Pay without the biometric feature. However, it does require a pin to gain access and is therefore pretty secure.