You can shun credit cards all you want, but understand that more than half of consumers get things started with a credit card.

That’s right; a new study from FICO, the brains behind the ubiquitous FICO score, revealed that 50.1% of the population (in the study) opened a bankcard before any other type of account.

The term “bankcard” is the fancy banking term for a credit card issued by a bank, such as American Express or Chase or Citi.

And while you don’t technically need a credit card to build credit, it’s very clear that most people use credit cards as a stepping-stone for larger loans, such as auto loans/leases and mortgages. 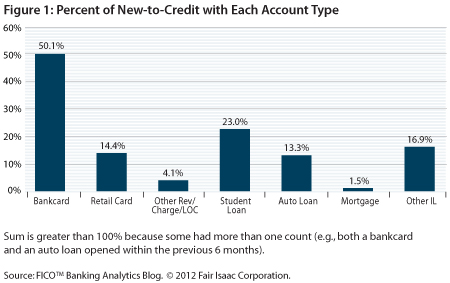 Credit cards seem to be the most prevalent type of credit extended to new consumers because of their relative ease of qualification, along with their perceived necessity.

They’re probably also the most marketed of all types of credit, especially by banks who already have customers using their checking accounts and debit cards.

The second most common type of credit line for “new-to-credit” consumers was a student loan (23%), which also makes sense given how expensive college is these days.

Again, these types of loans are generally easier to qualify for than auto loans and mortgages, so it makes sense.

By comparison, auto loans were a first for only 13.3% of new credit consumers, while mortgages were seen in new credit accounts just 1.5% of the time.

If you’re wondering why, it’s because auto financing companies and mortgage lenders aren’t too keen about handing out large loans to consumers who haven’t proved themselves.

This is why I always recommend building your credit history with simple lines of credit such as credit cards.

Dave Ramsey and other anti-credit card advocates might argue otherwise, but without one, it could make your road to a more significant loan bumpy to say the least.

But those people probably don’t believe in auto loans or mortgages either, so you can’t really argue with them. 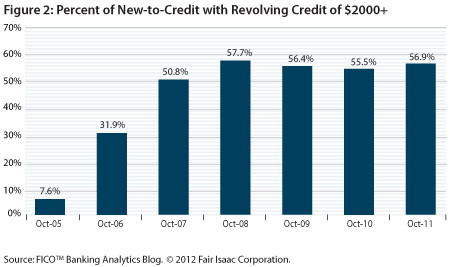 As expected, most of the credit lines on credit cards for this group of newcomers were pretty paltry.

The moral of the story here is that responsible use of credit cards will lead to higher credit limits, which in turn will lead to more sizable loans down the road.

It’s all a trust thing – build trust over time and you will get the loans you want and need.

For those who paid on time and saw their credit scores increase as a result, median credit limits were $5,400.

Meanwhile, those who made missteps with their first lines of credit wound up with a median credit limit of $1,062. You do the math.

Finally, FICO noted that the median FICO score for these new consumers after one year was 659.

That compares to the national median FICO score of 713 at the time. So if you’re wondering what credit score you start with, here’s a clue.

Additionally, FICO noted that scores were pretty concentrated for the new-to-credit group, with half between 580 and 700.

[See my credit score range for a complete breakdown.]

So hopefully this analysis will enlighten those who are just getting their feet wet, along with those who still have questions, even after years of credit history under their belts.

For the record, the research findings came from a random sample of five percent of credit reports from one of the top credit bureaus.

Read more: The pros and cons of credit cards.