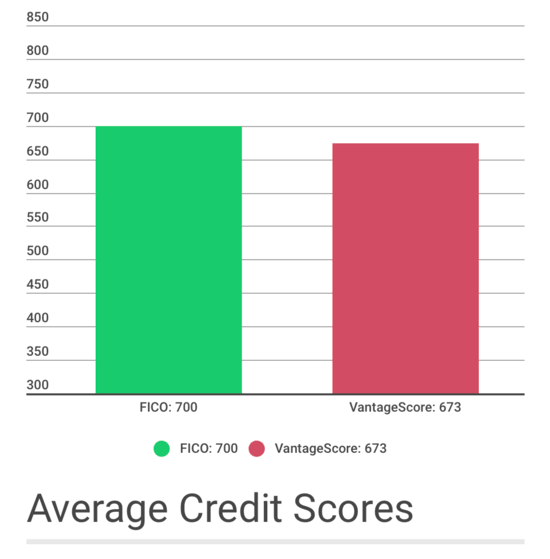 When it comes to credit scoring, or any scoring for that matter, individuals always want to know where they stand.  After all, if you can’t compare yourself to others, how can you tell if you’re good, bad, or just plain average, right?

That brings us to the age old question, which will forever be disputed, “What is the average credit score?”  Keep in mind I’m referring to credit scores in the United States. It’s hard enough focusing on one country let alone the entire world.

There Are Different Types of Credit Scores Out There

Once again, this is a loaded question, because it depends on which credit scoring model and/or credit bureau is providing the data.

There are also FICO scores based upon data from Equifax and TransUnion. So this makes answering our question all the more difficult.

Back to that “average credit score.”  It’s not really the “average” because this type of data is usually only calculated as a median, meaning the middle number in a certain distribution.  In other words, half of U.S. consumers have a score below the median, and half above the median.

An average, on the other hand, would take the sum of all credit scores and divide them by the number of people to come up with an average score.

Okay, high school math lesson aside, Fair Isaac, the creator of the FICO score, last revealed that the average credit score (median) in America is 700, per data from 2017. And because most credit scores stay within a 20 point range, that average credit score is likely to remain unchanged unless the scoring model changes dramatically, which it probably won’t.

So if your FICO score is below 700, you’re likely paying higher-than-average interest rates and also running the risk of not getting approved for the lines of credit you apply for.

The national average VantageScore is 673, according to Experian’s State of Credit 2016 data.  They actually use the word “average.”  This credit score has yet to become widely used, so it’s of less importance, at least for now.

However, it’s calculated in much the same way as the FICO score, with payment history and credit utilization the most heavily weighted factors.  So you can practice the same smart credit habits and score well with both credit scoring algorithms, and any others out there.

So that’s the most recent data on credit score averages.  I suppose this gives you a number to aim for, though no one really wants to be average, do they?  (a good credit score explained)  Also be sure to check out the different credit score ranges for more on where you stand and why it’s so very important.

One final note.  Although there isn’t specific data, I would bet that the average credit score by age rises as we get older.  This is partially to do with credit depth, and also related to being more responsible as we age.  That said, it is difficult for a young consumer with limited credit history to achieve a truly excellent credit score.

Recently, credit card issuer Capital One published general guidelines on what they thought excellent and average credit scores were. If you defaulted on a loan in the past five years, you might be considered “average” to Capital One.

Or if you have a limited credit history (less than 3 years), you may be considered average. In other words, average can come from both a lack of credit history or past mistakes, so it’s very tough to generalize.

In any case, you should aim to be well above average to ensure you get approved for every credit card and loan you apply for!  After all, no one ever got a pat on the back for a C.