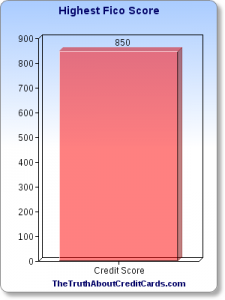 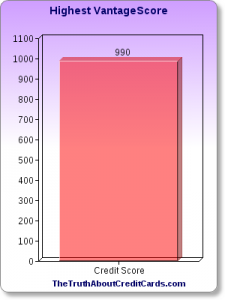 For those obsessed with their credit score, I’ll provide a little insight on the “highest credit score possible.” Yes, it’s a finite number that ends in the high-triple digits.

It’s also a known number, which is a relief in the rather clandestine world of credit scoring. Now let’s not make it too suspenseful here.

The highly regarded FICO score is clearly the most popular of the credit scores out there, and if you didn’t already know, the associated range of credit scores is 300-850.

850 FICO Score Is Best…How Many Have It?


So as far as FICO is concerned, the highest credit score possible is 850.  Perfect credit, some would say. Pretty simple, right?  Oh, and just to make it 100% clear, the higher your credit score the better folks…this isn’t golf.

If you want to get really wonky about it, there are some versions of FICO that go above 900 and as high as 950, but the standard FICO score only goes up to 850, so it’s usually best to focus on that number if you’re after a perfect score.

But it’s important to note that there are a variety of credit scores used for all types of different purposes, so the highest credit score may potentially be higher or lower than 850.

For example, some auto leasing companies may use a credit score range that goes up to 900 for FICO-based scores. If you apply for an auto loan, they may provide you with paperwork that shows this atypical range. It also means your score may not be as good as it appears, if the highest possible score is in fact higher.

The same might be true when shopping for auto insurance, seeing that credit scores are now used for premium pricing as well.

Wells Fargo also provides a bank-industry free credit score that goes as high as 900. So again, the highest credit score possible is 900 in some cases.

In the case of student loans, a balance transfer, or a home loan, you’re looking at an 850 FICO if you want to be tops, but a perfect credit score is not required to get approved or even obtain the best loan rates.

At a certain point, your credit score doesn’t matter once it’s over a certain level. For example, credit card issuers likely won’t look at you any differently if you have a 790 credit score or an 850 credit score. Both will receive the same treatment, though only one is a perfect score.

Apparently somewhere around three million Americans have an 850 FICO at any given time. That’s the rub though – scores don’t lay dormant, they change all the time, so perfection might be fleeting for most.

Also know that while three million is a big number, it’s a tiny fraction of the population with a credit score. We’re talking about 200 million people overall.

The Higher the Credit Score the Better, to an Extent

Put simply, if you have a credit score above 800, you’ve got what is considered an excellent credit score and you’ll likely be approved for all types of credit, from credit cards to mortgages to student loans and so forth, assuming you have the credit history to back it up.

Even a FICO score above 760 should be sufficient to get the best terms on the credit cards and loans you apply for, so there’s kind of a point where it no longer matters how high your credit score is.

There’s no need to keep actively improving your credit. It’s merely for bragging rights at that point, or perhaps a buffer if you experience a late payment or your utilization rate increases suddenly.

Indeed, there are no extra benefits for having an 850 credit score, aside from it being kind of cool. People have done it though, and will continue to do it. Don’t ask me how though, it seems rather elusive.

Personally, I doubt I’ll ever get an 850 score and that doesn’t bother me one bit. Because I open credit cards fairly regularly, I’ll probably never have the perfect credit age (across all my accounts) to bump my score to that level, even though I make all payments on time and stay well below my credit limit.

But as I said, there’s really no difference between a 760 FICO score and an 850 FICO score. Both should be sufficient to get approved and obtain the lowest rates possible.

There’s also the lesser-known VantageScore, which was created as a response to the mighty FICO score by the three major credit bureaus, including Experian, Equifax, and TransUnion.

Back then, anything above 900 would land you in their “A” bucket, which as we all know from grade school is the best you can do.

So again, you don’t necessarily need the highest credit score out there to get the best terms or to guarantee approval.

Later, VantageScore 3.0 was rolled out and the highest score aligned with that of FICO, at you guessed it, 850.

In other words, 850 tends to be the magic number no matter what model is used, though you don’t need to be obsessed with this number.

Most people don’t ever obtain perfection, nor does it matter if they do. Does it really make a difference if you score 100% on a test versus say 98% or 97%? Probably not, other than to pump up your ego.

If you have an 800 FICO score, you probably don’t need to improve your credit score further. It’s likely fine where it’s at and good enough to obtain the best loan rates on a new credit account. That’s not to say you should let it drift lower, it’s just that there are diminishing returns at a certain point and you might want to focus on (or worry about) other things instead.

Regardless of how high your credit score is, you can still be denied for a loan or a credit card because of other issues, like lack of credit depth, too much outstanding credit, or blemished payment history.

Some consumers may exhibit high credit scores without accompanying credit history, simply because they don’t have any negative items on their credit report.

At the same time, they might not have a lot of good stuff going on either.  Think of a small child that hasn’t done anything bad in their life yet, but hasn’t really done much good either.

While it’s a worthy goal to attain the highest credit score possible, it will mean very little unless you’ve proven to creditors over time that you can support large amounts of debt and make on-time payments through thick and thin.

So a truly perfect credit score is much more than just those three little digits.

[See: What a good credit score really is for more on that.]

In fact, someone with bad credit could get approved instead of you for a certain type of credit, even if you have perfect credit, simply because the lender likes their overall profile better. You could get denied for something seemingly as innocuous as high credit utilization.

Also keep in mind that you get 3 credit scores, one from each major credit reporting agency. So even though one might be the highest possible, if the other two are less than perfect, the bank or lender will likely rely on the mid-score of the three if they pull a tri-merge credit report.

Or the lower of the two if only two scores come up. This is especially true when it comes to mortgage loans.

There’s also the possibility of them pulling your credit score from just one of the bureaus where you’re not so perfect. This tends to be the case with credit card companies. They generally only rely on one credit bureau so make their credit decisions.

To ensure you have the highest credit scores possible, check your credit across all three credit bureaus to avoid any setbacks. That way you’ll be seen in the best light no matter what.

There are tons of free options to monitor your credit scores and credit health (and check for identity theft) these days, so there’s really no excuse for poor credit. Heck, simply paying your bills on time should be enough to get you most of the way there!

Learn more about how a FICO score is determined and/or how you can improve your credit score, assuming it’s not as high as you’d like it to be.

In summary, the highest credit scores possible are: