Ever wonder why credit card issuers are so generous? You know, offering you 100,000 points simply for spending $4,000?

This is an option with Chase Ultimate Rewards points, so it’s not just hypothetical.

Chase makes the deal even sweeter by offering a $300 annual travel category credit, meaning the same smart consumer could offset the annual fee.

They could push it down to $150 in year one using that credit, and climb $150 into the black in year two before the second annual fee is charged.

All told, they’d come out $1,150 ahead if they cashed out the points and took advantage of the credits, then canceled the card. Does this mean Chase is going to start operating at a loss?

Not Everyone Does What’s Described Above 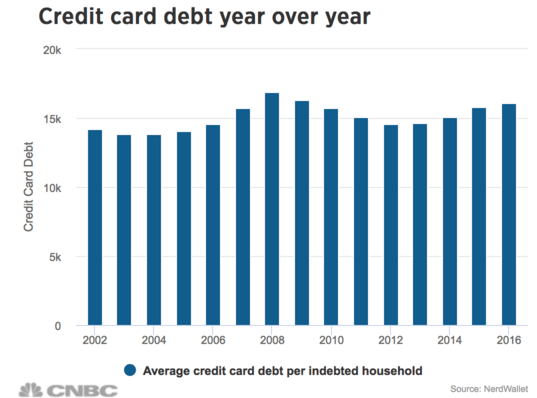 Here’s the thing. You are smart, but not everyone else is. In fact, a lot of people aren’t very smart when it comes to credit cards, let alone their personal finances.

For every smart person, there are probably three suckers who are, for lack of a better phrase, doing it wrong.

Instead of carefully meeting minimum spend as to not overspend, they’re spending frivolously and beyond their means. And as such, they’re going to pay interest, lots of it.

Yep, Chase is happy to give them the 100,000 points in exchange for years of finance charges. Oh, and Chase will make money via interchange fees on all those swipes and dips too. So no sweat off their back.

If you don’t believe me, just consider that indebted households have average credit card debt of $16,061.

That ~$16k balance is the highest it has been since before/right around the financial crisis that ensued in 2008.

And the current average APR on those balances is a sky-high 18.76%, with the typical American household paying some $1,292 in credit card interest annually.

Are Those Credit Card Points Costing You?

So you have to ask yourself, are you actually winning here, or are the billion-dollar banks winning?

If I had to guess, I’d go with the latter, even if there are indeed thousands of super savvy, smart churners out there. They’re still outnumbered and always will be.

But before I sound too sad about it, this is actually a good thing for those who are responsible. It means the mega credit card bonuses will continue to roll in, despite credit card issuers taking huge losses on them from time to time.

Yes, I should add that Chase expects the Chase Sapphire Reserve to reduce the bank’s profit by between $200 and $300 million in the fourth quarter of this year.

That’s without any marketing of the hugely popular offering. But don’t worry, they still expect to make about $5 billion in profit…

While it’s a loss now, it’ll be a gain later. They have time to make good on their investments, and are expected to break-even on the card in about 5 ½ years. Stretch out the timeline a little longer and they’ll likely be making a killing on the outstanding card balances.

In summary, strive to be one of the smart credit card holders who wins the game, but understand the risks involved. And take a hard look at why credit card issuers are seemingly giving away money. The reality is they’re not, they’re actually loaning it to you for a massive profit.