Back in early 2009, a spat between Fair Isaac (now FICO) and Experian meant consumers could no longer obtain access to all three credit bureaus’ FICO scores without applying for a loan.

You could still get your hands on an Equifax and TransUnion FICO score via FICO’s website, but without the third major credit bureau onboard, it didn’t mean a whole lot.

After all, it meant you were missing a key component of the overall picture, seeing that many lenders rely upon tri-merge credit reports in their credit decisioning.

The end of Experian and FICO’s relationship coincided with a lawsuit involving the development of the VantageScore, which was meant to give FICO scores some much-needed competition.

Apparently FICO wasn’t too keen on the rival credit score, and the relationship broke down.

Now, for whatever reason, the two parties seemed to have moved past their earlier dispute, and finally after four long years consumers can once again access their Experian-based FICO scores. 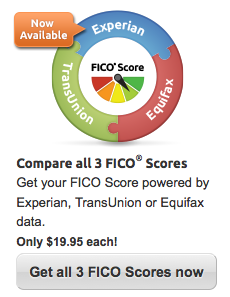 Last week, myFICO began selling all three FICO scores to consumers again, but they aren’t at all cheap.

They are currently on sale for $19.95 a piece, with no deal for ordering all three scores as part of a package.

However, you can get access to an Equifax-based FICO score for free via 10-day trial.

So while it’s nice that FICO moved beyond their past differences with Experian, it doesn’t do a whole lot of good for consumers, who would have to shell out about $60 to see all three credit scores.

If you don’t want to shell out the cash, you can obtain an Experian-based credit score from both FreeCreditScore.com and Credit Sesame, though the ranges used are slightly different than the classic FICO score range.

And the data isn’t necessarily computed the same, seeing that FICO has their own ways of doing things.

However, the scores shouldn’t be too far off from what FICO might come up with.

Finally, if you apply for a loan where a tri-merge credit report is used (standard with a home mortgage application), you’ll most likely be able to see all three of your FICO scores, including one based on Experian data.

Though consumers couldn’t access Experian-based FICO scores for the past four years, creditors still could, and regularly used them to make lending decisions.

So that’s one way of knowing where you stand with all three credit bureaus, though obviously once you apply for a loan, it could be too late.

Chase Freedom cash back calendar:
5% cash back (on up to $1,500 in combined purchases) on streaming, wholesale clubs, and cable/internet/phone

Citi Dividend cash back calendar:
5% cash back (up to $300 cash back per calendar year) on streaming and at Amazon.

Discover it cash back calendar: 5% cash back (on up to $1,500 in purchases) at grocery stores, Walgreens, and CVS.