It was a good run, but debit cards have finally ceded to credit cards in terms of gaining market share, according to the latest Nilson Report.

The industry publication noted that debit cards had continuously stolen market share from credit cards for purchase transactions until 2012, when the trend finally reversed course.

While clearly not a lot, it could mark a shift in consumer behavior, which seemed to favor using debit over credit.

There’s been a lot of speculation that younger generations have been eschewing credit, perhaps because they’re more than aware that it can land you in piles of debt.

But this research could indicate otherwise, assuming it’s accurate (it’s not a compelling number to say the least).

However, future numbers point to even more credit card dominance, with credit cards snagging a 54.72% market share by 2017, and debit transactions dipping to 45.28%. 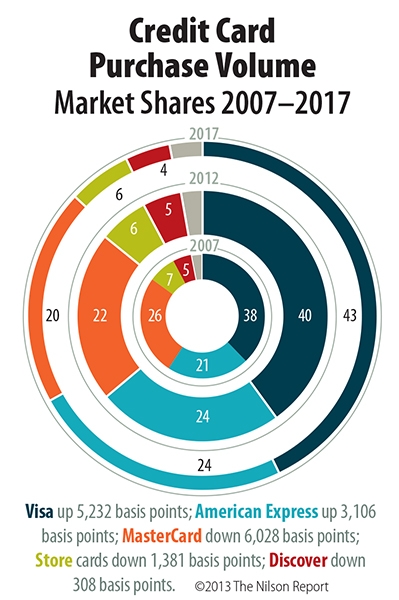 With regard to credit card purchase volume, Visa continues to dominate. The payment processor held a 40% share in 2012, compared to a 38% share in 2007.

It is expected to see that share rise to 43% by 2017, and if the trend continues, it could eventually account for half the growing credit card market.

American Express has also been gaining market share, with its 21% share in 2007 rising to 24% in 2012, though it seems to have topped out. It’s expected to hover around that level until 2017.

It’s not all good news though – MasterCard has actually seen its market share drop over the past five years.

The smallest of the major credit card players, Discover, has seen its market share hold steady around 5% for the past five years, though volume is down somewhat.

By 2017, it is projected to see market share fall to 4%, which is a blow for the company that has been working hard to gain the public’s adoration.

We’ll see if their Discover it card and customer service-centric stance will prove the forecasts wrong.

One thing is clear, investors love Visa. Shares of the company stock have risen nearly 270% over the past five years, with shares flirting around the $200 level.

It’ll be next to impossible to knock them off their perch anytime soon or ever for that matter.

Read more: Is it better to use cash or credit cards?